The Path to Understanding That We Are All Just “Us”: An Interview with British Artist Jonathan Davis

'We All Have a Story' — ‘Wir Alle Haben Eine Geschichte’ will be Jonathan’s second solo show in Germany. It is a result of his 5 months artist in residency with coGalleries Berlin 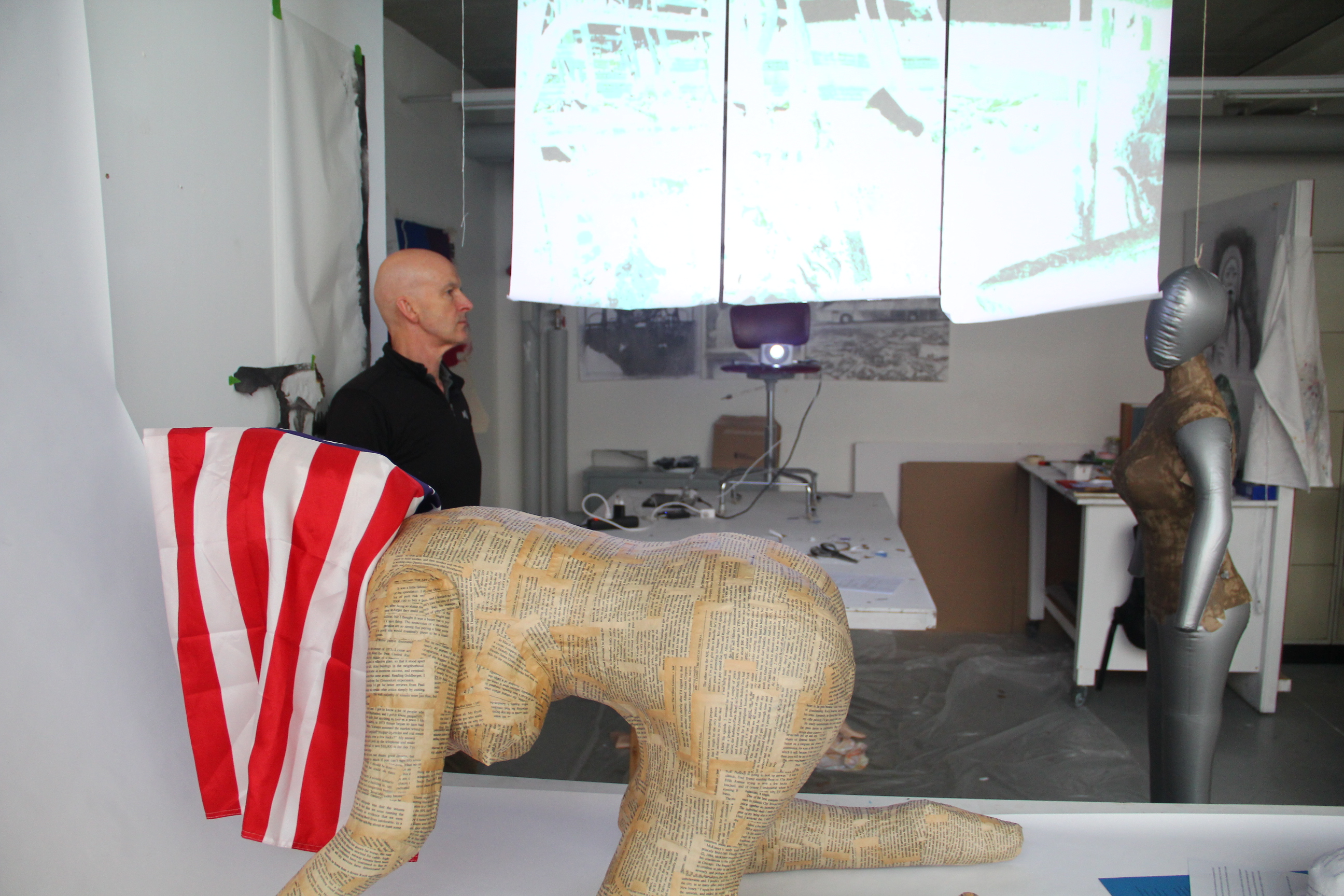 Jonathan Davis is a British artist who in 2012 concluded a career in architecture and strategic urban planning to establish a full time art practice in London. However, the so-called ‘populist revolts’ of 2016 soon caused him to radically re-cast his developing practice in 2D, mainly abstract, painting and drawing in favour of work that raises questions about the nature of contemporary discourse and its relationships with modern European history.

This work is about the power of storytellers to influence how we think; about lies, the distortion of the meaning of language and how this can lead to the dehumanisation of other people. Ultimately, the title refers to the possibility that every time you behold another human being, it helps to remember that every one of us has a story and is on a journey, whether this be personal or collective. I feel that this idea is one of the great ‘levellers’ for humanity. The moment you begin to understand someone else’s story you can no longer classify her, him, or them as ‘other’. It’s the beginning of understanding that after all, we are just all ‘us’.

You have chosen to come to Berlin to make this work and show it here. Do you have specific reasons for this?

Yes, it is deliberate. Because of the subject matter, I would like this work to be understood as having a firm empirical basis. By presenting it in Berlin, I’m trying to encourage the audience to think about the consequences of indulging in certain modes of thought. By this, I mean thinking styles that define ‘us’ as ‘we, the people’ and  ‘them’ as ‘impure’ and not worthy of inclusion in ‘our’ society. I’m making reference in the exhibition to Gregory H. Stanton’s work from 2016. Stanton has developed a ‘process map’ that clarifies ‘Ten Stages of Genocide’, and if you accept the notion that the implication of these thinking styles might be a slide back towards the totalitarian state or other forms of oppression, then there is unfortunately no better city in Europe than Berlin in which to contemplate the impacts of living under dictatorships. I think we have already learned from history that that the future of Europe largely depends on the future of Germany. And now, as in the past, the future of Germany is more likely to be played out in this city than any other.

Given what you say about Berlin’s central role in European history, is there direct historical content or reference in this work?

Yes, there is. I frequently refer to the Nazi dictatorship because it stands for all man and womankind as a warning of what might happen to us if we do not check ourselves and continue to indulge in the lazy, even convenient thinking of the contemporary era. We know these days that ‘something is different’ and last year, Wolfgang Tillmans helpfully asked us to consider ‘Was ist anders?’ ('What is different?'). We need to understand first WHAT is different today before we can begin to consider HOW to engage with it.

It says in your CV that you’ve been working in this way since the ‘populist revolts’ of 2016 — that it has changed your practice — do you think artists have specific social or political responsibilities?

Yes, I do but only if that’s how we want to work. ‘Socialist Realism’ for example, categorically defines a way in which artists should work and I think we mostly would agree we wouldn’t want to return to any ideological position like that.

I also think that art plays all sorts of roles in our lives, politics are just one possible aspect. I mean, why would you want didactic or rhetorical art pieces in your living room?

Yes, it is in a number of ways. First, I am a sexual minority. Second, my partner is not of a majority European race. These factors build a certain awareness of vulnerability into one’s life. And then there’s my age. I was born fifteen years after the end of the Second World War. When I was a kid, that war — to use the phrase coined by the English Author L.P. Hartley — was a ‘foreign country’. But today, with the benefit of time, I feel that this was a very recent experience. And this reminds me all of the time, how easy and convenient it is to forget, and how what is going on today brings us right back to where we were in the 1930s.

The work in this show seems to be strongly metaphorical and you also appear to be using symbols. In what ways are you using these ideas to structure your work?

Much of art, whether visual or literary, is structured around metaphorical and symbolic reference — not all — but much of it. I think the reason for this is a need, rather than to ‘hit’ an audience with a blunt message, rather to help the person receiving the message understand it in a way that reveals its meaning more slowly. In this way, people can consider how the work might relate to their own experience and feelings, which makes it more personal. But I do also think that artists could be saying ‘look how clever I am’ and the audience is either annoyed that the work isn’t ‘speaking’ to them directly, or flattered because they are as clever as the artist and that they are ‘in on it’, in an esoteric sense. Maybe then I’m trying to flatter people in the hope they will see the point I’m making. 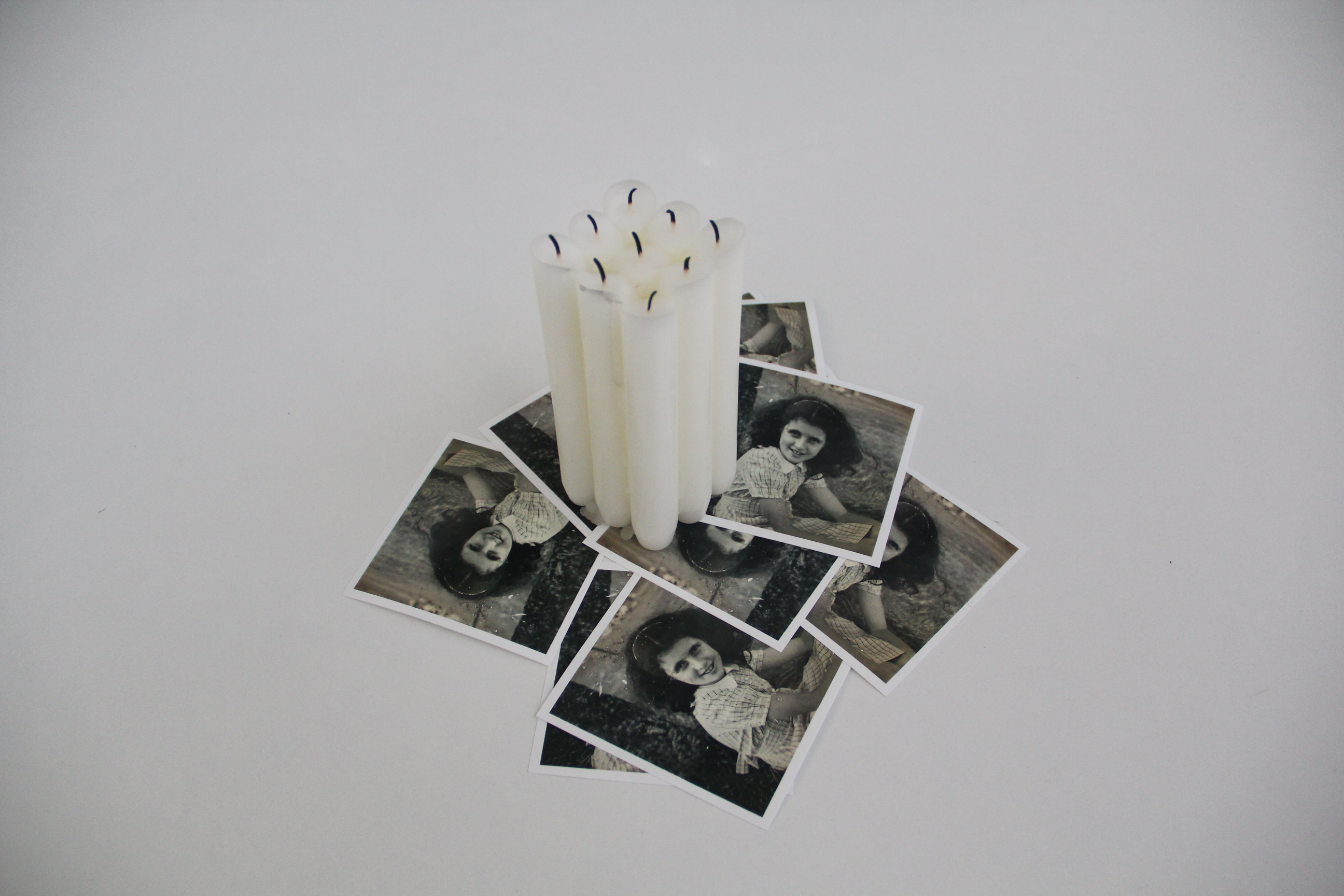 You’ve talked about both storytelling and linking your work to empirical sources outside of the work. Are you drawing on specific literature sources?

Yes, I am because I have spent a long time researching the origins and causes of both ‘national’ and ‘progressive’ populism. The work does contain direct quotations from documents and literature sources which I’m using in an ironic sense. As for recent writing that seeks to analyse the phenomenon of populism, and which I think helps us understand the world we are now living in, I plan to provide a select bibliography with the exhibition.

You’ve talked about words, symbols, metaphors and empiricism. Is there any aesthetic dimension to this work?

There is, but I see it as a way of drawing you in. First of all, I would like you to be interested in it as an aesthetic proposition. After that, I probably would like you to be disturbed by it. I hope it might look beautiful to you — or better maybe, intriguing — and once you’ve taken it in that way, I’d like it to cause you to ask questions.

Looking at your artist’s CV, you haven’t said anything about being an installation artist, but the ways in which the pieces relate to one another do cause us to think about installation; is this therefore an unconscious development?

I think it is unconscious but at the same time it’s probably inevitable. I trained as an architect and was in practice for a long time doing strategic work with cities. Architects work in three dimensions of course, and they generally want to programme space in accordance with their total conception. Many of us even dare to think of ourselves as film directors, imagining the dimensions of time, sound and life into the spaces we create. So, I think for me it is inevitable that if I think that artistically I have a story to tell I’m going to want to set this up in such a way that the parts relate to one another. To go back to the modernists, I would like the whole to be seen as greater than the sum of the parts.

Finally, are you hoping that the audience for this show will draw certain conclusions from engaging with it?

Yes, I would like to people to think about the responsibilities we all hold when we communicate with others; the power that the words we use and the ideas we covey have to influence the way other people think and act. As we have seen, this can fundamentally affect the course of history. I suppose what I’m asking an audience to do, is to stop and think, listen to others actively and see whether we can go back to the world I thought we were working on, which was to build a more inclusive, pluralist culture.
You might say that it’s the work of a bleeding liberal heart. If the people of my parents’ generation who gave their lives to defeat Nazism and fascism had bleeding liberal hearts, then so be it. This is for them.

On the 5th of December the solo exhibition “We All Have A Story” — ”Wir alle haben eine Geschichte” is going to open at coGalleries, where Jonathan Davis' latest works will be on show until December 11th, 2019.

Applications are now wide open for our new round of Artist Residencies at coGalleries Berlin.